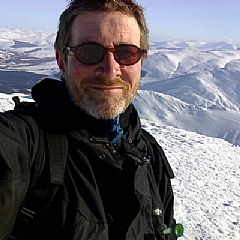 Filmaker Andy Mackinnon has been living on North Uist for 15 years. He originally went to work with Lochmaddy Arts Centre,  Taigh Chearsabhagh on a collaborative Documentary feature called Passing Places. He just stayed!

He has lived in North Uist, working with Taigh Chearsabhagh, ever since, and became the Arts Officer, responsible for arts curating and programming, in 2003. he was a Scottish Screen Lead Practitioner part of group developing national strategy for screen education – 2000-2005

In addition to helping to refocus the centre’s visual arts strategy on environmental prerogatives and developing an ambitious exhibition, residency and projects programme, he has been instrumental in creating a high quality digital video production facility in the arts centre with XDCAM and HDV video production kits and industry standard post-production resources.