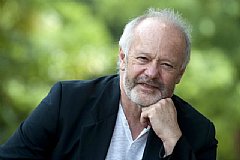 Michael is no stranger to Cromarty. He directed his first feature, Another Time, Another Place,
here in the town and its surrounds. Since those early days he has directed such critically acclaimed films as White Mischief, Il Postino, and 1984, starring the late John Hurt. He’ll be discussing 1984 at a festival screening on Saturday - a remarkable look behind the scenes of a landmark film. He’ll also be presenting one of his favourite films, City of God.